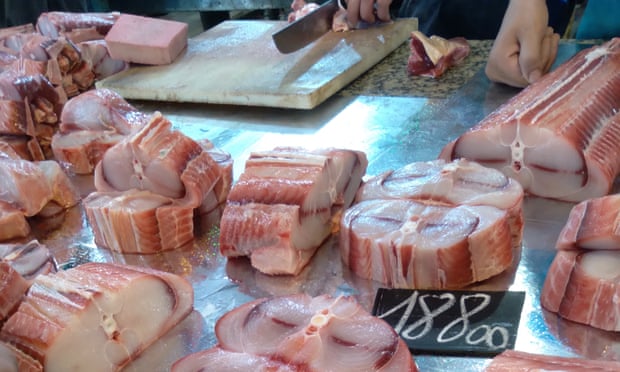 A lack of awareness and ever-increasing competition among fishing boats threaten one of the sea’s most vital species.

The temperature is cooling down in the fish market in Monastir, Tunisia. Still, the suffocating smell of the fish guts that have sat through the full force of the day’s heat hangs heavy in the air. The stallholders have left now, but on the floor amid the detritus is the unmistakable shape of a severed shark’s head.

Tunisia’s sharks are as diverse as they are beautiful, encompassing everything from the 680kg great white caught off Zarzis near the border with Libya two years ago, to the minuscule dogfish, which hunt the seabed for crustaceans. All have a vital role in maintaining Tunisia’s finely balanced marine ecosystem. Nevertheless, Tunisia is thought to be the second largest fisher of sharks within the Mediterranean, second only to Libya.

“There are 63 different types of shark and ray in Tunisian waters,” says Jamel Jrijer, a marine programme manager with the World Wide Fund for Nature (WWF). “Twenty-four of those are endangered. As an apex predator, sharks have a critical role in keeping other species numbers down. Without them, the numbers of other fish could explode and the whole balance of the marine ecosystem could be destroyed.”

The guitarfish, he says, can only be found in the waters off Tunisia. Likewise, researchers have also become aware of juvenile great whites swimming in the Mediterranean, suggesting a possible breeding ground and potentially making the area one of the most precious stretches of water in the world.

But lax enforcement, a lack of awareness among Tunisian fishers, and the ever-increasing competition among fishing boats for a shrinking number of fish are conspiring to threaten one of the sea’s most vital species.

Many of Tunisia’s sharks, including the great white, are protected and their capture prohibited. All others must be reported to the fishing guards – government officials who oversee the country’s ports. But neither fisher or fishing guard are trained in distinguishing the sometimes subtle differences between species.

“Sharks often get caught in nets and drown, so they’re dead when they’re brought on board,” Jrijer says. “Others are being deliberately targeted by fishers. Either way, once they’re on board, they’re cut up and their guts thrown overboard, making their bodies almost impossible to identify.” This exacerbates the challenges in developing a fuller picture of what is going on under the sea’s surface and where resources need to be targeted.

Despite the last reported attack taking place in the 1920s, the perception among both fishers and the public is of the shark as a man-eater. Images of blunt-nosed sharks, landed at the northern fishing port of Kelibia in the summer of 2019, were enough to prompt panic among tourists and locals.

“During spring, we go fishing almost every day,” says Sassi Alaya from the southern port of Gabès. “We caught sharks in the past, and we still do. We call them ‘sea dogs’. There are three types: the blue shark, the white shark and the brown one. They can weigh from 1kg to 30kg. But the ones we catch usually weigh between 5kg and 10kg.

“We sell the sharks to merchants [at the market]. We clean them first, throw their insides in the sea, and sell them. All fishermen do the same thing.”

In northern Tunisia, the price of shark meat is said to have risen from three to four dinars (about £1) per kg to between 12 and 13 dinars as its popularity has grown. In some places, such as the market at Monastir, shark meat is often passed off as swordfish. Partly as a result, the WWF believe there are now about 35 fishers in Tunisia specifically fishing for sharks. “I only started catching sharks seven years ago,” Alaya says. “I didn’t used to have the right net before that. There’s a special one for fishing sharks. It’s called ‘gattatiya’.

“Catching sharks is not illegal. If it were so, we wouldn’t be selling them publicly. So there was never a warning or any kind of ban put on the fishing of sharks.”

With Tunisia’s economy battered by the coronavirus pandemic and generally expected to undergo its greatest contraction since gaining independence in 1956, it is unclear where protecting its native marine species sits within the government’s priorities. Emails, phone calls and a fax from the Guardian to the ministry of agriculture, which has responsibility for fisheries and aquaculture, received no response. But the situation may not be completely hopeless.

In Tabarka, in the country’s far north, Imed Triki has been going out to sea in his small boat every day to catch what he can. Money is tight and the revenue he gets from selling shark meat to the middlemen at the market goes a long way to maintaining his nets and boat.

Nobody ever came to Tabarka to discuss the importance of sharks to any of the port’s small fishers, Triki says. “We heard of the matter through Facebook and associations,” he says. “Not all of us are aware of the issue, of course. We’re doing our best to raise awareness. It’s true that many fishermen are not very keen on preserving endangered species because they need to earn their livelihood and feed their families.

“But when they find support from their fellow fishermen, they become cooperative themselves. We’re trying to reduce the fishing of all endangered species. Sea turtles, sharks, anything that’s endangered.” 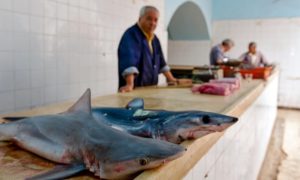